Say what you mean, mean what you say. What are the times when this is most difficult for you?

This is definitely most difficult for me when I anticipate that what I have to say will create conflict, or be met with some kind of resistance.

When I read Satya by Judith Lasater, I appreciated her comments regarding Marshall Rosenberg’s Nonviolent Communication (NVC). I’ve been introduced to NVC on several occasions and have begun to try to practice it when communicating in the aforementioned situations. At first it feels artificial and rigid, but what I’ve realized is that in it’s essence (at least as I perceive it), the heart of the technique is about sticking strictly to what I know to be true, which is to say my own direct experience.

One of the aspects of the technique I struggled with was the direction to avoid describing one’s feelings in adjectives that end in “-ed” and to boil down one’s feelings to one of the four basic emotions: joy, sadness, anger or fear. At first I couldn’t agree that it all boils down to those four — emotions seem to be more complex and nuanced than that – but finding the diagram below with the levels of intensity and in-between secondary “colors” helped me to appreciate the model. 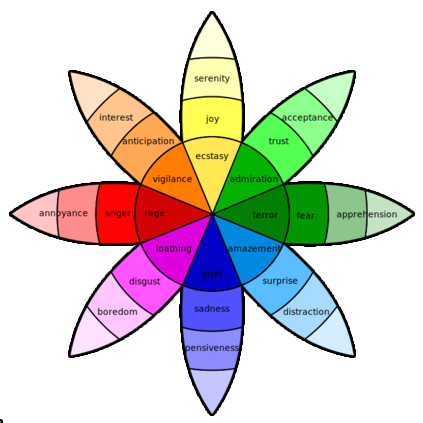 Perhaps more importantly, I began to realize how those “-ed” feeling adjectives can be loaded with subtle judgments and implied accusations. For example: “When you said such-and-such I felt traumatized” contains the implied accusation that “You traumatized me”. Somehow saying “When I heard you say that I felt scared and a little angry” feels cleaner, more honest: this is what I heard, this is what I felt.

Then the other piece is clearly expressing what we need or want. I’ve found that this actually requires that I be more honest with myself and to be clear about what’s motivating me. It seems that there can be no satya without deep and clear self-knowledge. And so I continue to practice…