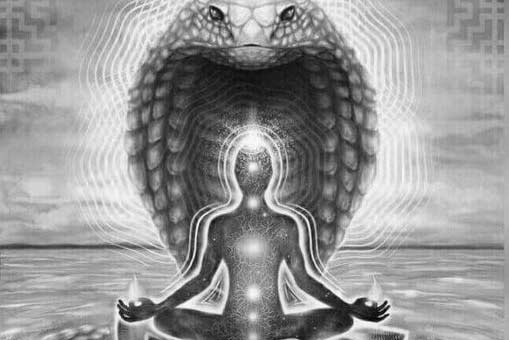 On Brahmacharya, Part One

How aware of sexuality are you in your life and practice? Is it something you consciously direct or not?

I am aware of sexuality in my life and practice as an extremely compelling force, perhaps the compelling force. But I suspect that what “it” is, and what the yama of Brahmacharya is pointing at, is something far more profound than what we would generally think of when we say “sexuality”.

It may be that human sexuality is simply the most obvious manifestation of this mysterious force, one that is plenty compelling in its own right and quite the bucking bronco to learn to stay on top of. I can look back at my own life experience and see this force emerging, pulling and pushing me through the experience of living: from the early curiosities of childhood, to the awkward but obsessing pangs of adolescence, to the longings and romance of youth, through the woundings, frustrations, cravings, joys and sorrows of adulthood.

In fact, years ago, as I began to grow in my capacity to reflect on my life experience and to draw wisdom from it, I felt compelled to write about my history of relationships, observing the deep patterns and the “crimes against wisdom” in all of their gory, glorious details. It remains largely unpublished, but the introduction spells out the compulsion, wounding, inspiration, and dance of  the sacred/profane I experienced pretty succinctly:

Women are my religion and I’ve been a devotee as far back as I can remember. Serious as a monk, morning and evening prayers every single day and night, visualizing her next to me, wrapped around me, whispering how she loves me and wants me to take her. Toiling through the day like an aspirant whispering prayers for her to appear in the flesh, hungry to take the magical communion when she says Take, eat, this is my body, this is my breath.

It is so rare when she appears to me, and the ecstasy is fleeting. When it’s past and she’s gone, or when my desire and pain got the best of me and I wasn’t true, I’m bereft. Wretched. Get on my back and start praying for her again. But those precious moments when I’m in her and she’s wrapped around me and holding my gaze… Those keep me going.

She has so many faces. These are the ones I have seen. Like every good goddess worshipper I know her forms are infinite and that she’ll go from warmth to wrath in a heartbeat. I know she changes, and that she’s everything. I know she’s going to eat me alive some day.

Which brings us back around to the deeper dimensions of this force. It seems that everything in the manifest creation (prakriti?) is characterized by polarity, which we might think of as male and female, but also as electric and magnetic, centrifugal and centripetal, light and shadow, expansive and contractive, or that which reaches and that which awaits the reaching, as Ra puts it.

And many wisdom traditions speak of Love as being the primary force in the creation. Which seems to point us in the direction of considering this dance of apparently separate things, woven together, attracted or repelled by this mysterious force, as a prime gateway to the mystery. To Yoga. The “yoking” of subject and object, me and you, self and other-self… however we might want to put it. We’re presented with many opposites: things which we crave, things which we are averse to… and in that gateway of polarity, the question is posed again and again: Will we accept and merge, or reject and attempt to control? Do we separate and manipulate, or seek to understand the mysteries of love and unity?  What is love which accepts all and wisdom which discriminates?

Is it something we consciously direct?

Is that a trick question, haha?  Just within the context of human sexuality, I can look back at how unconscious and compelled much of my behavior has been. I can also appreciate how the process of aspiration, of seeking, of aligning with what we might call the Divine or higher will, seems to begin to create a force of its own around which the forces of desire can organize and integrate.

I sense that this is what the yogic work entails. We might think of it in terms of healing and balancing the chakras and of working with the Kundalini, and along those lines I appreciate Richard Freeman’s suggestion that the esoteric meaning of Brahmacharya is to be “in the Brahama Nadi”. To put it more simply, we are alive and we live in an illusion that is characterized by polarity in a countless multitude of manifestations. To the degree we are unconscious we cannot help but be compelled by the push-pull. And to the degree we awake, perhaps we can begin to be in a way that is non-dual, a way that abides in the underlying unity beneath the appearance (purusha?). And perhaps the action that comes from that beingness is what is, in its purest sense, Brahmacharya.