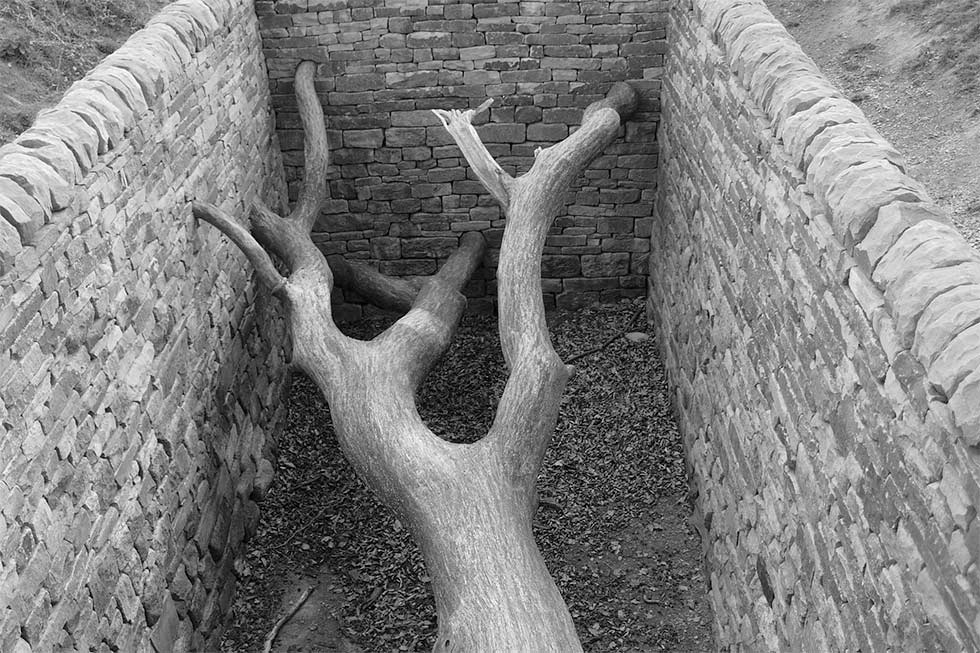 Is there an area of concern or confusion you can create containment around? The idea of holding, embracing, defining.

I always enjoy reading Mary Paffard’s thoughts and was delighted when she mentioned Andy Goldsworthy’s work in her article on shauca, or “purity”.  I’ve been a big fan of his work for decades, so I could immediately connect her observations with the wonder and beauty that I find in his large scale compositions of natural materials seemingly magically embedded in the land itself.  His work with stone walls is compelling and beautiful, an interesting counterpoint to the border walls that have become such a polarizing symbol in our times.  These walls are aesthetically beautiful, winding like a river or a serpent through the landscape, curving around the trees instead of asking them to move, unapologetically stretching across highways, disappearing gracefully into the water to remind us that division is temporary and sometimes an act of love. 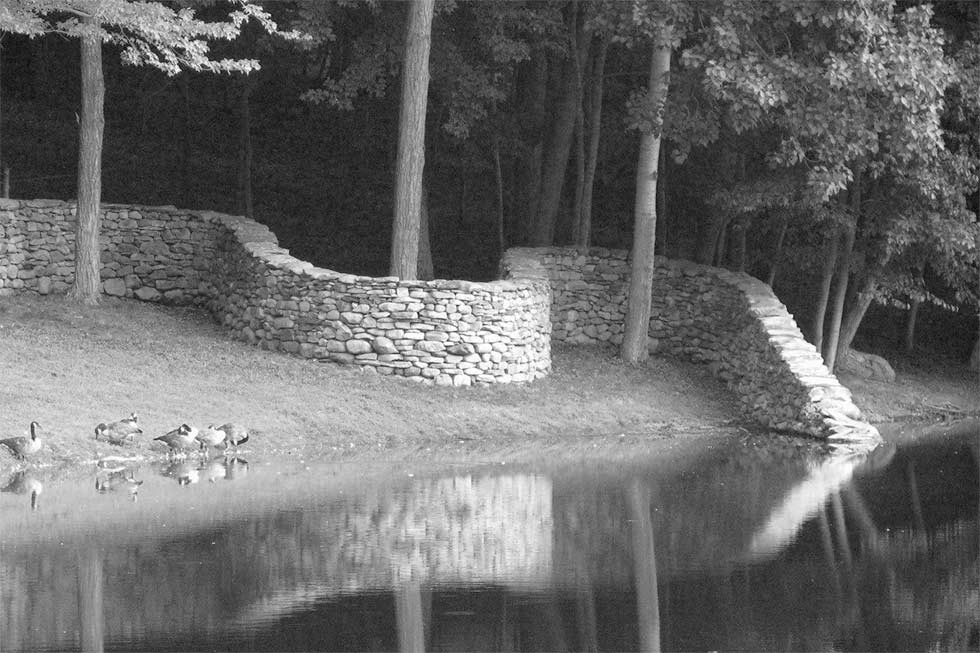 I do have to confess that I would not have jumped from contemplations of saucha to the idea of “enclosure”.  I tend to think of purity as the state of being free of elements that are not truly oneself.  Pure water is free of contaminants, or even of other wholesome ingredients:  free of anything that is not-water.  Mary’s ideas about transparency and luminosity seem to resonate with this notion.

But the thought of enclosure, or limitation, facilitating a kind of purity is also a compelling one.  I’ve often thought of how in the context of the visual arts and painting, the blank canvas begins the process with limitation.  Even before the first mark is made, an enclosure has defined the space of the working.  And then when the first mark has been made, the decision of that mark, of a this and not that, begins the process of mysterious unfolding that painting can be.

In Western astrology, Saturn is the planet of limitation.  In ancient times it marked the outer edge of the observable solar system, and thus marked the boundary of the known.  It was associated with the old god Chronos, time, who devours his children.  In the natal chart, Saturn’s placement might express areas of limitation and weight, but also of teaching and discipline.

Mary writes of her advice to a struggling student:

I suggested she create some kind of imagery of enclosure in her practice. That she sealed herself off from the world and let her practice time be held by the sacred. Create a wall to keep the endless nagging questions at bay at least for the time of the practice. This is what we sometimes have to do. Our practice is a kind of enclosure. And the creating of that space is part of the process of Shauca. Defining, clarifying space and time and seeing what’s there.

In my own practice, I have found that creating an enclosure of time and space is indeed essential.  The third element, not mentioned above, but perhaps implicit, is rhythm, like the winding of Andy Goldsworthy’s wall.  Creating this sacred space to return to again and again, like clockwork, or like a heartbeat, truly does create a pure space that fills with power.

It’s interesting that in the Western Mystery Tradition, the idea of the temple is important, and when performing a ritual practice, even if it’s in the bedroom, in imagination a vast temple might be imagined, corresponding to the divine mandala or energies that one wishes to invoke.  Our bodies are in fact such temples, limited in one sense, but because of that, containers that can be filled with the Divine Light.

But to the point of the question:

Is there an area of concern or confusion you can create containment around? The idea of holding, embracing, defining.

Yes.  Earlier this week I learned that I was going to become responsible for homeschooling my two boys.  We had already decided to homeschool, but had applied to enroll them in a charter school that would handle all of the details:  the paperwork, the curriculum, progress monitoring, etc.  But the state made some changes in funding and all of a sudden there was no more room, anywhere.  So now it’s up to me  to plan and administer the whole thing, including coming up with a name for the school to file with the state (current working name is “Professor Snape’s Dismal Academy for Boys”, but I haven’t committed yet).

When I first got the news I felt a bit overwhelmed and wondered if I’d have the energy to pull it off.  After a bit of struggling, I decided that I was going to devote a small, set period of time each day to do the research and learning necessary, and then happily forget about it for the rest of the day.  I didn’t think of it at the time, but this was an “enclosure” strategy, containment.  Working within a particular canvas of time, developing the concept for a while, and then stepping away and attending to other things (which I think also gives the deep mind freedom to work out connections while the conscious mind is occupied elsewhere).  The demarcated time also seems to allow me to give the effort more energy, more enthusiasm, knowing that when the time is done I can shift gears.  I don’t know if this is in the spirit of the classic niyama, but it does indeed feel like a purer effort.